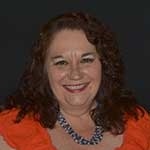 Dedra was born in Broken Arrow, graduated from Union High School and began her first career with McDonnell Douglas in the Technical Publications department. Working in the “Bomber Plant” lasted 15 years until the plant shut down. At the time, she had two young daughters and went to Rogers State University and obtained an associate’s degree. A former co-worker from the Bomber Plant convinced Dedra that her next career should be in insurance. Since 2000, she has worked in various capacities at various independent insurance agencies. She worked at one time for RCI and returned again to the RCI team in 2015. Dedra’s entire insurance career has been focused in commercial lines.

Dedra is the lady in the office that calls everyone “hon.” If you ask her where she wants to go for lunch, her answer will always be Mexican. When not at the office, you can find Dedra spending time with her family or on the patio with a cold drink. She enjoys gardening and has a house full of gigantic Great Dane fur babies.

Favorite food: Always Mexican!
Favorite quote: “Finding the courage to begin.…man cannot discover new oceans until he has the courage to lose sight of the shore.” – Author unknown
Favorite thing to do when not at office: Gardening and patio time!
Favorite book: 212° The Extra Degree – Sam Parker