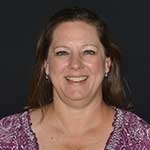 Leigh was born in the Texas Panhandle and moved to Claremore, OK to be closer to family. She started working in a small independent insurance agency in Borger, TX in 1993. Leigh joined RCI in 2003 after moving to Claremore. Leigh works in RCI’s commercial insurance department and has her CISR designation.

Leigh is easy going and is a friend to all. When not at the office, Leigh loves reading, working in her yard or playing with her “kids” – her 3 dachshunds. Leigh is RCI’s world traveler and recently took a tour of Ireland. Leigh is a devoted Texas Ranger fan.

Favorite food: Chicken fettuccine alfredo
Favorite quote: “Act enthusiastic and you will be enthusiastic” – Dale Carnegie
Favorite thing to do when not at office: Read, watch TV and work in the yard
Favorite book: The Stephanie Plum series by Janet Evanovich
Favorite movie: While You Were Sleeping